"I Can't Touch My Toes"
So today the girls wanted to go outside & play. We have so many outdoor toys its like a little mini playground to them. Well, I got them all dressed & put on their shoes. For Aidann I had put on some super cute new jeans that had gold glittery pockets with this cute matching shirt. Well, we went outside & Aidann goes straight over to the big blue rubber ball to pick it up & throw it, but then she suddenly stopped mid-bend. She stood up & then tried to bend again, but couldn't. Then she turns to me & says, "I can't touch my toes!". She was so serious & concerned too, the face was priceless! Lol. I don't know if you have ever seen how sometimes toddlers have those cute chunky tummies like the Pillsbury guy. The jeans restricted her lil' tummy movement so much she couldn't bend, it was so cute & sad at the same time. I asked her if she wanted me to take off the jeans but she said "No". She then decided to go over to the slide. Let me just tell you right now it was the funniest thing to watch her try to climb up that ladder with the inability to bend in half. I asked her if she wanted help, but once again she said, "No, thank you". It took her a good 5 minutes but she finally made up to the top. Now if you didn't think that was "funny" enough, try watching a toddler who can't bend go down a slide! Precious & determined lil' thing she is. I think we'll stick with yogi pants and leggings for a lil' while longer.

﻿
"You Have to Lay Down"
After the slide incident & relieving Aidann of her constricting jeans, we decided to color with some chalk. Aidann came over laid down on her tummy & started to draw. Not too soon after, Asher came over & did the same exact thing. They looked like they were having so much fun & so I decided to go over & sit down to draw also. Suddenly, they both stopped what they were doing & looked at me like I was crazy. "You have to lay down", Aidann said. Apparently, I missed that memo- "In order to draw with chalk, you must lay down". Man, even my 1 year old got that memo. Now that I think about it, every time I have seen either 1 of them drawing with chalk, they always lay down on their tummies 1st. Ha ha! 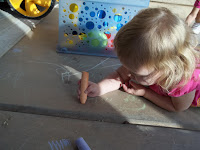 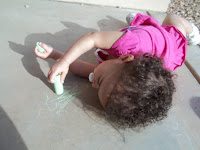 "Don't Worry, I Got It"
So the other day we are playing in a friends backyard & suddenly Aidann stops everything & points, "Weeds! Eww!". Then she grabs a big old handful right out of the ground & says, "Don't worry, I got it!" & walks them right over to their outside trash like she owns the place, throws them in, & dusts off her hands- Geez, I guess tact is the next thing we'll be teaching our 2 year old. Right? Lol.